Nobody would ever describe me as passionate about cooking.  Whether it’s due to my being colorblind and having a tendency to overcook things – “It LOOKS done, but better give these burgers another 20 minutes, because E.coli…”, my lack of planning – “Cordon Bleu sounds good, I bet I have everything at home, just need these breadcrumbs…”, or my predisposition towards complete laziness, I don’t spend a lot of time in the kitchen.  Since my kids started growing teeth, however, necessity has truly been the mother of invention, and my forays to the grocery store have widened in scope to include more than just the freezer aisle.  Mine is a culinary story of many defeats, some draws, and the occasional act of God.  When I pull things out of the fridge, develop grudges against innocent ingredients, but somehow put something on the table that the kids don’t “accidentally” drop on the floor or leave my wife with a look on her face usually reserved for a Lifetime Original movie, I know my acceptance in our home is secured for at least one more day.  This is the story of last night - when the light of providence bathed me and my halibut tacos in its radiant glow.

Last winter my brother took his wife and two kids camping out on some island he doesn’t remember.  Before setting up on the beach for the night, they dropped a longline out in the bay.  The next morning, they headed home after pulling up a couple hundred pounds of halibut from their set.  (There’s a lot more to this story, but I wasn’t there and Jack (my aforementioned brother) is at work, so that’s all you get).  As any good son would do, he gave our mother and her husband all the fish that wouldn’t fit in his freezer.  Jump ahead a few months, and my momma is visiting me and the kids here in Missouri.  For this trip, Mom and Dan (my aforementioned step-father) bought a van, loaded in a chest freezer, and ferried it to the mainland for a month of visiting grandkids.  Luckily, they stopped in Missouri before heading to see Michael (my not aforementioned step-brother) and his new little girl in Colorado.  Out of the chest freezer and into mine were some spot shrimp our friend Aussie Rob caught, some salmon Mom and Dan pulled out of the water, and a bunch of halibut slabs my brother and his family took from the bay of an unnamed island in Southeast Alaska.  The food grown in Missouri is amazing compared to what I grew up within Ketchikan, but there is no replacement for excellent fish and the taste of home, which I’m eternally grateful my family is willing to provide.  Long story short, my brother killed some fish in Alaska, my mom drove it to me in Missouri, and I fried it in a cheap pan on a dirty stovetop.

Halibut tacos are actually easier than regular tacos.  When you make tacos with ground beef there is a ton of work that goes into the prep; finding a cow and turning it into ground beef, chopping onions, and finding a cooking spoon that doesn’t have holes in it can take an eternity.  With halibut, you just pull it out of the freezer the morning of, slice it into portable-phone-charger sized portions, season and fry for five minutes (flipping once).  Heat up some corn tortillas, layer sliced cabbage for texture (and to prevent the halibut from breaking out and escaping through the bottom of the food frisbee), grated cheese, cilantro, and lime juice, and *BOOM*, your progeny are eating food they can’t come close to appreciating.  While loading up with tomatoes, onions, and other common taco complements/ingredients can be tempting and aren’t discouraged, I prefer to keep things simple when I’m dealing with my scarce supply of fish.

Yesterday, everything went according to plan.  In the morning I pulled a vacuum-sealed 2 lb. filet of halibut out of the freezer and tossed it in the sink.  After picking the kids up from school we headed to the local grocer for “taco stuff”.  Once at the store, and with the children sent on missions of obscure product procurement, I was able to swiftly and efficiently locate pre-shredded green cabbage, paprika (I didn’t end up using it for the tacos because I forgot, but I bet it would have been awesome), chili powder, salt, little corn tortillas, peanut oil, lime juice, salsa and a brick of mozzarella.  A lot of this stuff you may already have in your home, but that’s a level of adulting I haven’t reached yet.  I also grabbed a sweet potato for sweet potato fries as a side.  Once the kids came back from their respective missions empty-handed (“Real Mayo” is a thing, but they never find the jar of “Fake Mayo”, and 3% milk doesn’t exist) we headed home for some anxiety fueled cheffing.  Everything went better than expected; I didn’t have any flour, which should have been included with the seasoning to prevent the halibut from breaking up, but the size of the fish was good enough that it didn’t segment when I fried it.  The fries weren’t cooked nearly long enough, but the children probably wouldn’t have eaten them even if they had been, picky as I allow them to be… All in all, though, it was a good meal.  The kids were full, the wife wasn’t fiddling idly with her ring, and I had enjoyed a dinner that reminded me of why growing up in Southeast Alaska was such a privilege.

Tags: halibuttacos alaskafishhouse alaskaseafood Posted in Alaska Seafood
0 comments
Posted on 29-11-2018 17:00 by Chuck Slagle
Share it
It’s not going to crack itself…

The ability to recognize an opportunity to excel, or exceed customer expectations, is a valuable asset that companies look for in their employees.  Latoya demonstrates this innate quality on a daily basis.

Our fresh crab is a popular dish at the Alaska Fish House, though it does take a little effort to eat.  Occasionally, Latoya has had call to sit with some customers and open their crab for them.  One example, however, stands out as an exceptional portrayal of Latoya’s customer service acumen in the way she handled the situation.  A customer approached her, explaining that she was having difficulty with her food.  As they approached her table, the customer was basically yelling at her because she couldn’t shell her crab, so Latoya, as she had in times past, volunteered to do it for her.  Latoya stood there for the guest’s entire meal opening every piece of crab, even though the customer berated her for the duration.  Even though the customer was still irate, Latoya offered her guest more crab on the house, despite the knowledge she’d be opening every piece of that as well.  Though the customer refused and left the restaurant, Latoya was able to continue her day with a smile, proud that she had done everything she could to please her customer.  She was even congratulated by several other patrons that had seen the situation unfold and commended her for doing an amazing job.  One couple put it perfectly when they told Latoya, “You did an awesome job, that was the best display of customer service we’ve ever seen”.  Examples like these, and there are many, are why we’re proud to have Latoya Thomas as a leader on the Alaska Fish House team. 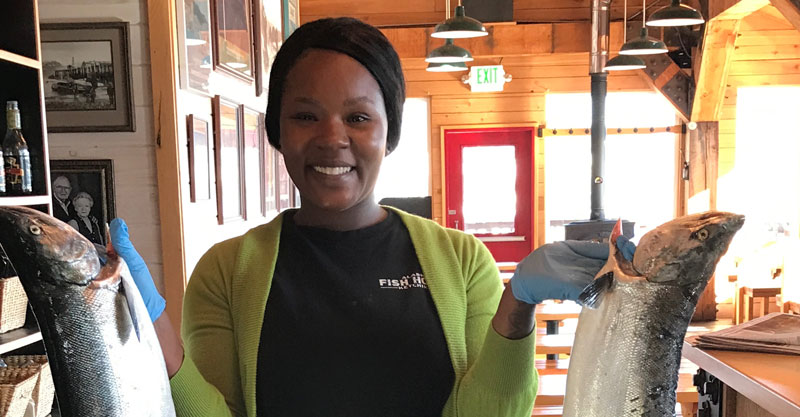 Anyone familiar with Ketchikan knows that the downtown waterfront is dominated by the cruise ship docks.  From berth one, adjacent to the Salmon Landing market and Thomas Basin (where our restaurant is located), and stretching down to berth four, pedestrians can find it a difficult hike getting from one end to the other.  Although it is a straight shot, the high foot traffic, busy one lane road, and regularly inclement weather can make the journey seem a bit longer than the mile or so that it actually is.  Chatting with an elderly couple during their meal, Latoya found that the husband and wife had hoofed it all the way from berth four just to visit the Alaska Fish House.  They were tired and not looking forward to the walk back to their ship, so Latoya had one of her servers hop in the van and get them back to their boat while she covered the server’s duties.  While we don’t typically offer logistical support to those desiring a meal with us, Latoya recognized an opportunity to exceed expectations and took it.

Latoya Thomas, like so many of our summer citizens, came to Alaska on a sort of “working vacation”.  Whether drawn north for the job itself, or the opportunity to spend a summer in Alaska without going into the red, a lot of Alaskans came for a visit that ended up lasting years.  Originally from Louisiana, Latoya arrived in Ketchikan with years of experience in hospitality and customer service with a desire to “experience something different”, eventually taking a seasonal position at the Alaska Fish House.  Now working year-round due to her outstanding work ethic and skill set, you’ll find Latoya down in the trenches during the summer season managing the restaurant floor, and overseeing improvement projects during the off-season.

Every summer, over one million visitors, from all different walks of life, arrive in Ketchikan as they travel through Southeast Alaska.  With such a diverse array of guests, those in the service industry end up with quite a few stories by the end of the season.  Latoya Thomas has had a couple interactions with our customers that we feel exemplifies perfectly the type of team member we value at the Alaska Fish House.  Not one to toot her own horn, we though we’d do it for her. 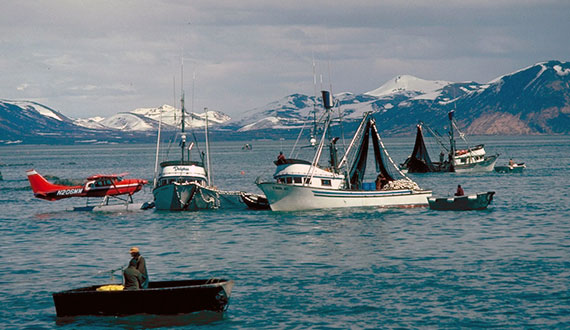 Take-a-look at the commercial fishing methods most commonly used in the Ketchikan area.  Of particular interest are our video renderings of some local legends doing what they love.  Climb aboard with Russell Cockrum while he and his crew purse seine for salmon.  Gillnet with Ole and LaDonnaGundersen aboard their vessel the LaDonna Rose.  See hand trolling as it was accomplished years ago with Sean Hovik, as well as the more modern method of power trolling with Rory and Marion Bifoss.  You even get a taste of solo longlining with Mike Jewett as he tells of his lifelong obsession with halibut fishing in the Southeast. View More.

The Alaska Fish House offers Ketchikan's highest-quality seafood dining experience.  Visit us for hours of operation, location and our menu offerings.  You'll also find our featured recipes and cookbook, along with cookbooks created by local commercial fisherwomen LaDonna Gundersen, Kiyo Marsh, and Laura Cooper.  Whether looking to expand your culinary library, seeking inspiration for tonight's dinner, or looking to get down to the Fish House for a meal, you'll find what you need here.