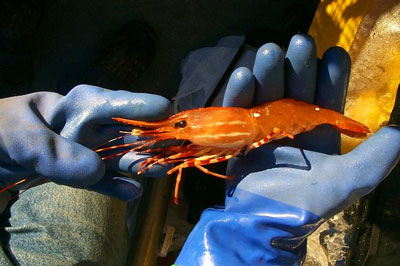 Alaskan spot shrimp are a prized commodity here in the Southeast Alaska. Known for their sweet flavor and firm texture, these large (up to a foot long!) shrimp can be grilled, steamed, roasted, or used for sushi. Because they live in a rocky habitat on the sea floor, there is no need to split them and remove the mud vein before serving, as with their cousins that live along sandy or muddy locales. As such, you'll often find spot shrimp as the main course in an Alaskan meal instead of just an appetizer.

The shrimp fishing process is relatively simple. First, take a shrimp pot, throw in some bait, attach a line to the pot and the buoy, and throw it overboard. After about one or two days of soaking at 350 feet or so, and with the highly recommended use of an electric pot-puller, you should be landing your dinner.

This species of shrimp can be found along the Pacific Rim from Southern California to the Sea of Japan. As with most shrimp, overfishing can be a cause for concern. Here in Alaska the population is guarded well, with a yearly commercial limit of about 800,000 pounds. Although spot shrimp begin their lives as males, after about three years and one spawning cycle the majority of them will molt and start over as female. The spawning takes place between 500 and 700 feet below the surface, but they migrate seasonally to shallower waters during their approximately 11 year lifespan, and can be found anywhere from just below the cresting waves to 1500 feet beneath the ocean surface.

Baranof guests who will be fishing with us for a few days often find it well worth their time to drop a pot on their first day. Our boats are all equipped with pot pullers, so just let us know if you'd like to make this a part of your vacation. 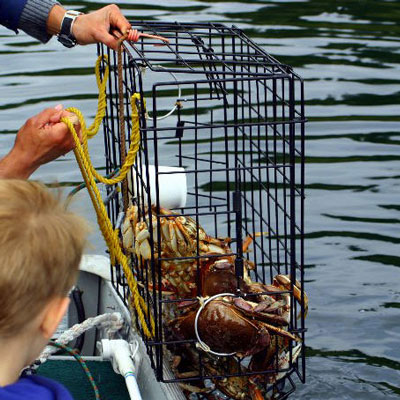 Dungeness is the most common crab Southeastern Alaskans eat. Although it is often overshadowed by the larger Tanner and King crabs, Dungeness (or “Dungy”) is a wonderful addition to any meal. Whenever a local goes out fishing for the day, there's a good chance they're going to throw a pot out and pull it on their way home in the evening. With simple preparation and myriad uses, a Dungy rarely goes to waste. Depending on your taste, a pot of well-salted boiling water and anywhere from 11 to 15 minutes is all you need. Some popular cooking ideas include cracked out of the shell and served with garlic butter, omelets or quiches for breakfast, crab cakes, seafood chowder, dips, or pasta sauces.

Part of the reason for the popularity of this crab is its abundance and easy access. Preferring shallower waters above 100 feet, you don't need a pot puller to get the highest yields. Dungeness are regulated by size and sex; they must be 6.5 inches across their shells and male for you to harvest them. You can find Dungeness from the Aleutian Islands all the way down to Baja California, but the commercial fisheries only cover the range of ocean stretching from Southeast Alaska to California.

Guests on our Wilderness Fishing & Dining excursion may notice buoys out in front of our camp. These aren't mooring lines—these are an indication that one of our guides is planning dinner. (If you're fishing with us for a few days, setting a pot or two is a quick and easy way to supplement your take-home catch or jump start your evening back on shore). Here you'll enter into the "crab butter" debate. If you cook the crab whole, the digestive gland (hepatopancreas) can be eaten after removing the upper shell. Yup, you got it: that’s the “crab butter” we’re talking about. Some folks prefer to stick with just the meat, but you should try the crab butter at least once, as many people find this to be the tastiest part. Whichever camp you're in, we have the right local Denali beer to pair with your meal.

The name Tanner crab actually includes two different species: Chionoecetes opilio (which you may recognize from the show The Deadliest Catch) and C. bairdi. They are also marketed under the name "Snow crab,” which is derived from the beginning of their genus' name, Chio, meaning "snow.” The monikers can be a bit confusing. Tanner and Snow are usually interchangeable, but when speaking of the specific species, snows (opilio) are in the Bering Sea and the North Atlantic, while the tanner crab (bairdi) are the species that reach farther south into the Gulf of Alaska. Snow and tanner crabs, while genetically diverse, are able to crossbreed. Areas in the North Pacific and Bering Sea possess large numbers of these hybrid crabs, which may have given rise to the use of either name for both species.

Tanner crab are fished commercially from Southeast Alaska all the way north to the Bering Sea. Still a relatively new fishery, they've been managed for maximum sustainable yield since the 60's. After king crab, they're now the most important crab fishery in the state.

Due to the size of the pot and distance from Ketchikan you must travel to set it, charter fishermen don't commonly head home with their own tanner crab. However, on special request, Baranof is equipped to target these crabs up in Carroll Inlet. Planning for a day on the water to stock up on tanners can be a rewarding and worthwhile endeavor should you have the time. They make an excellent meal, so whether you order it for dinner or decide to catch it yourself, we recommend making it a point to enjoy this part of Alaska while you're here.

A lot of people that travel to Alaska fell in love with the idea after watching any one of the numerous reality TV shows released in the last decade or so, with the most popular being The Deadliest Catch. Hosted by Mike Rowe of Dirty Jobs, this series takes you through the trials and triumphs that Alaskan crab fisherman encounter while working in the Bering Sea. Since the shows inception, and resulting popularity, eating king crab in Alaska has become a bucket-list item for many.

There are three species of king crab commercially harvested in Alaska; red, blue, and golden. Also called brown king crab, goldens are the smallest of the three at 5 to 8 pounds each. As the only species commercially harvested in Southeast Alaska, they're known for having a similar, but slightly sweeter, taste to their larger cousins. Due to the depth at which you'll find these crab, they're typically not targeted by subsistence or sport fishermen, but you can catch the action on a tour from Ketchikan. Our friends on The Aleutian Ballad have an excellent excursion focused on king crab fishing just as it's done in the Bering Sea, and is our top recommendation for anyone passionate about king crab. Then, after your hankering for a king grab adventure is satiated, we suggest you depart your tour and swing right back to the Alaska Fish House, where we’ll set you up with a king crab lunch. As one of our most popular offerings, you’re near-guaranteed to enjoy every bite.

Why is Good King Crab So Expensive?

Alaskan red king crab is highly coveted for its size, richness and firm texture. The best king crab in the world is harvested from icy arctic waters and delivered by the fishermen in Dutch Harbor.