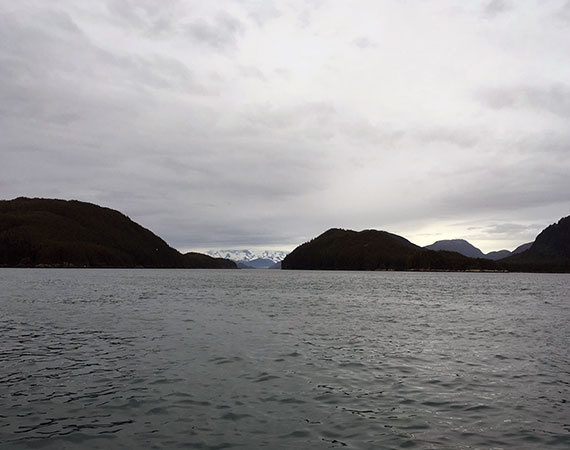 I said "Jason"as I approached the powertroller with the man operating the winch controls at the base of the boom mast, the bearded, work disheveled fisherman turned to me then smiled once he recognized the source of the voice,a warm strong handshake was extended and I greeted his son Calvin as well.

Then he started telling me what he had been up to since our last meeting a year ago,we both had plenty to relate and the brief encounter was heartfelt and fun, I explained the charter I was on that had brought me there to Hoonah and that I would be visiting a mutual friend of ours on the way to elfin cove which was one of the benefits of this journey seeing Jason and his son and Sean Roberts the captain of the "shadow" also reminded me of encounters possible while traveling in this country.

Knowing there are friends traveling these waters facing the same risks and challenges,admiring the country and its bounty in a mutually respectful manner adds to its allure and makes being away from home and loved ones less of a burden to bear.

Our time is so limited when we are working and traveling but we have to grab these moments when possible and make that effort for we just don't see when these encounters may happen again. I was telling Chris about feeling the difference in the motion of the water under the 16 foot Lund I brought to Elfin cove my first time there as I came through south inian pass the next day then we saw Jason in the "Quyana".

That is why I called him on the VHF as we both made our way through,it may be even longer before we see each other again and the setting makes the greeting even more special.

Beautiful country and capable,amazing people its been a good trip.