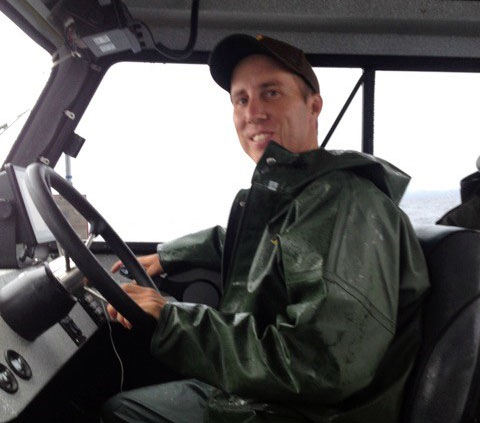 Finally got the call to leave Petersburg, and on the way out AJ, and I noticed several boats fishing right in the mouth of the harbor. As we got closer I noticed they were jigging herring! I was ecstatic, and Aj not quite understanding my enthusiasm, reluctantly motored the boat over to a skiff so I could ask to buy a sabiki rig. The skiff guys offered to give me a couple and handed them to me in their net, but I tossed a waded up $5 bill in their boat anyways. So as the yacht was pulling out of the Wrangall narrows to meet us at the mouth, AJ and I were there jigging up bait for the upcoming fishing trip. AJ said later I was giddy with excitement, and the whole time I had the feeling that he might have been in the cabin rolling his eyes at me. I was a little high maintenance as I would ask him to move if a minute or two went by without any bites. We ended up getting into em pretty good, catching two or three at a time.

Met the yacht in the mouth of the Wrangell narrows, Where the currents and 90 degree sideways wind waves made it tricky to dock on the back. As immaculate as the yacht is, I figured it was better to miss it twice than to hit it once, but the third times a charm. We headed north with passengers at 30 knots with the yacht heading the same direction at 12-14 which eliminated the need for a return run. We got to got pretty remote, and after a few spots with no success, we found a 280 foot hump where we nailed three nice and one very nice halibut in a single drift. The clients had a blast, and a couple of the halibut seemed a little extra scrappy that day Fighting harder than normal. By the time we were done fishing, the yacht passed us and was out of sight so we hightailed it north across Fredrick sound where the yacht was anchored waiting for us.

After dropping the passengers, we headed to Kake for the night, crossing back trough Fredrick sound and some unexpected 4-6 foot wind waves. This 28’ Raider handled very well in the chop, and we both appreciated the relatively comfortable ride.

We decided to anchor for the night, and couldn’t help but to drop down a couple halibut rigs. Next came the Jet boil and the freeze dried dinners, but the water wasn’t even boiling when we got the first halibut bite. I don’t giggle very often, but I was giggling as I was reeling in about a 25 lb halibut on my ultra light setup. The fish put up a good fight and made several nice runs, but eventually got him to the boat. AJ took my picture, and I released it as we had nothing to do with it. About a minute or two later AJ got to reel in a nice halibut that was lassoed with one hook in its mouth and one in its tail. It still put up a admirable struggle, and after his picture we shook this one as well. We finally got to sleep exhausted and completely satisfied after an exciting day fishing.